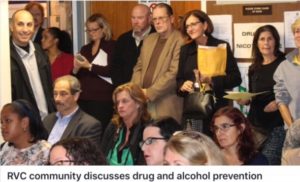 By Brian Kacharaba
Parents, counselors, community representatives and political leaders gathered at the The Medical Building in Rockville Centre on Nov. 16 to discuss how to combat underage drinking and teenage drug abuse in the village.
The meeting, hosted by the Confide Counseling and Consultation Center, was highlighted by an open discussion among the dozens of audience members that provided insight on what could be done to minimize an ongoing problem.
Some of the solutions given were hosting substance-free town festivals, having schools, businesses and organizations promote the dangers of drug and alcohol abuse, and getting bar owners and vendors to sign a “Not on Your Life” petition, proposed by MaryEllen Adams of the Long Island Prevention Resource Center, that says no minors will be served and that they assume responsibility for alcohol-related incidents that occur after those parties left their establishments.
But they all agreed that education is the key to reform.
Rockville Centre Police Commissioner Charles Gennario and police youth officer Nick DeLuca shared their concerns about fake identifications and bar owners who rely too heavily on bouncers to prevent minors from entering their watering holes.
“Once you get by the bouncer, that’s it,” DeLuca said. “The security companies that these bar owners hire don’t care. We can’t keep raiding these bars. How do we fight the battle?”
Gennario said that assault crimes go hand-in-hand with how busy the bars are.
“The assaults go when the bar goes,” he said. “The bars are lax. It costs the village when it starts to affect your crime rate. I tell the bar owners who over-serve that it’s a recipe for disaster.”
Gennario held a meeting with Rockville Centre bar and restaurant owners at Village Hall later that night to discuss state liquor regulations and tips on how to spot fake identifications.
“We needs education on fake IDs,” DeLuca said. “We need to educate the bouncers that tons of people are getting in with Rhode Island IDs when people know they live in town.”
Elizabeth Boylan, a Rockville Centre resident and mother of three, said a strong family base is a good way to prevent future problems.
“We need to get back to the family. That is the basis of our problems,” she said. “We need to get back to the basics.”
Gennario said that parents know which bars their children frequent and just hope for the best.
“The parents are aware of it,” he said. “They say, ‘I know my kids drink at such and such bar.’”
Prior to the group discussion, Rockville Centre Coalition representatives Jeanne Mulry and Ruthanne McCormack, State Senator Todd Kaminsky, Nassau County Comptroller George Maragos, and Dynamic Youth Center Executive Director Bill Fusco addressed the audience in support of the cause. Mulry and youth council advisor Beth Hammerman were later presented with awards from Confide.
Confide Executive Director Art Rosenthal, who hosted the festivities, was given an award citation from Maragos.